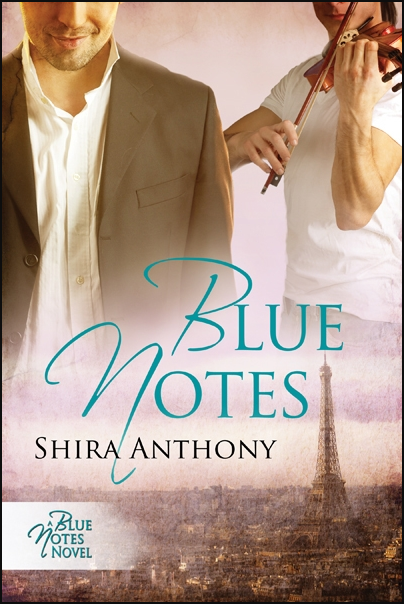 Title: Blue Notes
Author: Shira Anthony
Rating: 5/5 Smooches
Blurb:
A Blue Notes Novel
Blame it on jet lag. Jason Greene thought he had everything: a dream job as a partner in a large Philadelphia law firm, a beautiful fiancée, and more money than he could ever hope to spend. Then he finds his future wife in bed with another man, and he’s forced to rethink his life and his choices. On a moment’s notice, he runs away to Paris, hoping to make peace with his life.
But Jason’s leave of absence becomes a true journey of the heart when he meets Jules, a struggling jazz violinist with his own cross to bear. In the City of Love, it doesn’t take them long to fall into bed, but as they’re both about to learn, they can’t run from the past. Sooner or later, they’ll have to face the music.
Review:
Victor Hugo wrote, “Music expresses that which cannot be put into
words and that which cannot remain silent.” This quote seems to summarize the
theme of Shira Anthony’s novel Blue Notes, and in fact the entire series, well.
Jason Greene is a powerful New York attorney. He seems to have everything
going for him: money, friends, a good job and a beautiful fiancé. Jason is a
perfectionist and a workaholic. His well-planned life takes a dramatic turn
when he finds his fiancé, Diane, in bed with another man. This event forces Jason
to take a step back and begin to reassess his life and priorities. He does this
by getting on a plane and leaving New York to head to Paris, France, in the
middle of winter.
Although Jason spent his teenage years in France, he never really
appreciated the sites as he struggled with teenage angst and leaving his
friends. As an adult, Jason looks at the countryside with new eyes and ears.
His first night in town, he seeks out some good food and music and winds up in
a little dive listening to a jazz trio. He is taken back by the talented
violinist in more ways than one. 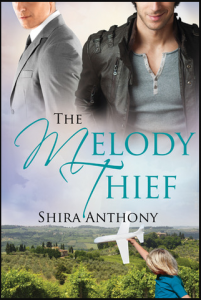 “The sound of the violin flickered like a candle
flame blown by an unseen breeze, then grew and melded with the muted piano,
sultry and inviting. Jules closed his eyes, letting the sound wash over him,
responding the slow harmonic progression on the piano, both instruments weaving
the ghostly melody.
“In a dim alcove only a dozen or so feet from the
musicians, Jason sat nursing his drink, transported by the sound of the violin.
It wasn’t jazz in its purest form. It was more of a hybrid combing the
traditional jazz rhythms of the fifties with a modern yet classical approach.
But whatever you might call the music, he found it transcendent.”
Through a bit of plot manipulation, coincidence and rain, Jason and
the young violinist, Jules, are thrown together and the plot continues to build
in a slow moving crescendo.
Jules Bardon is a talented violinist. He is attractive, flirtatious, a
bit of a prima donna and a brat. Jules is intense and playful. Although he
seems confident on the surface, behind the playful flirting, he is insecure and
juggling a lot of inner turmoil.
Jules is the antithesis of Jason in his style, upbringing and social
and financial status. And yet, the two men are instantly drawn together, which
proves to be very interesting since Jules is admittedly gay and Jason is not. Although
appearing confident and self-assured, Jason is lost and confused. He is clearly
smitten with the enigma that is Jules.
“Jules took a deep breath and closed his eyes
once more, gently laying bow to string and beginning the opening phrases with
their insistent, rhythmic repetition sounding below the melodic line. The
simplicity of the piece was both stunning and heart wrenching. Each phrase
built upon the next, rising in intensity and in pitch. It reminded Jason of a
prayer, powerful in its stark beauty, and he heard Jules’ soul poured out into
every note. And then it was over and Jason was left sitting in silence starting
at Jules as he has in the club, transfixed.”
“’Bach always touches my soul,’ Jules half
whispered. His fingers still rested against Jason’s cheek. ‘He must have known
great love, and great pain, to write something so powerful.’”
Blue Notes is more
than just a love story. It is a romantic tale exploring a journey of discovery,
growth and coming to terms with the past. Both Jason and Jules are lost, and their
connection through the love of music seems to pull them together and heal them.
Jason and Jules need each other, and that is a startling revelation for Jason.
Blue Notes is the
first book in a phenomenal series. Although this book can be read as a
standalone, this book begins a journey into Anthony’s world. The men Anthony writes
about are romantic, sweet and haunted. Although there is a fairytale-like
quality to the books, especially this first one, there is also a sense of
realism, which can be attributed to some autobiographical elements. Although
this book is not the best in the series, Anthony’s style clearly shines in the
descriptive passages and character development.
Anthony’s prose are poetic. There is an underlying soundtrack of
classical and jazz music that permeates this book, especially the scenes as
Jason and Jules explore Paris together. And while Jason takes Jules on a
romantic exploration of the City of Love, Jules takes Jason on a quest of
growth and passion. Jason reconnects with his past and music and discovers that
being needed by another person is wonderful.
“This is
what music is… what my heart is … and my soul.
“He understood the depth of Jules’ sensuality and
why it had so drawn him, right from the start: it made him feel alive and
human, full of faults, but accepting of them nonetheless. That was Jules’s
gift.”