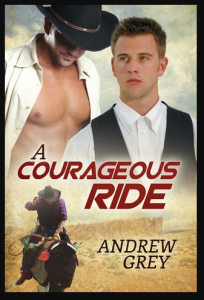 Aspiring
orchestra conductor Marshall is exhausted after months of auditions without a
single job offer. Marshall’s friend, Terry, recommends a change of scenery and
points Marshall in the direction of a dude ranch run by former bull rider
Indigo Santana. Marshall is understandably skeptical, but his friend is
convincing, and Marshall needs a break, so he agrees to go.

Indigo
captures Marshall’s attention but leaves him confused. Indigo’s confidence is
shot after an injury ended his rodeo career, and he walks with a slight limp.
He hasn’t been anywhere near a bull since he was hurt, and he’s not the most
accommodating host. After all, the only reason he keeps guests is because his
family ranch is all but bankrupt.

Marshall’s
attraction doesn’t go unanswered, which leaves him with a huge dilemma. He’s
torn between the possibility of love, something he’s searched for all his life,
and the career he’s worked toward for as long as he can remember, which is
miles away. From his side of the fence, Indigo doesn’t see how the ranch could
ever be enough.

Review:
Andrew Grey has a talent for writing
beautiful prose and engaging dialogue. He has a knack for engaging readers
within the first couple of sentences and cloistering them in the world he has
created. He successfully does this again in his latest novel A Courageous Ride, the third book in his
Bullriders series. Although this novel can be read as a standalone, the book is
more engaging if you have read the other books in the series first. Dante and
Ryan from A Wild Ride make a welcome
appearance in this book.
Indigo is a
former bull rider. During his last ride, he was seriously injured and can no
longer perform. Not only has he not been on a bull since his accident, but
thought of bull riding terrifies him. Although Indigo loves working on the
ranch, his homestead, he is having a difficult time coming to terms with his
new place in the world as a dude ranch owner.
The Circle R Ranch
is not just a home to Indigo. The ranch is his salvation and life. In order to
keep the ranch financially afloat, Indigo has turned it into a working dude
ranch. His guests learn how the ranch operates and participate in the daily chores.
Although Indigo is not hiding his sexuality, he does not flaunt it on the
ranch. The bull riding circuit is not the most open minded, and Indigo has
hidden the fact that he is gay from his family based on a traumatic family
event.
“He was just
about to go get it when a large car pulled into the drive. Indigo paused on the
porch and waited for the black sedan to pull to a stop near the other guests’
car. Then he jogged down the steps and out to the car. Indigo stopped when he
saw a gorgeous man get out of the car and look around. For a second he forgot
himself and stared openly, then caught himself and walked the rest of the way
to the car. It wasn’t a good idea to be that open. The guys on the ranch knew
he was gay, and they didn’t mind, but the guests were another matter, and he
knew it was always a bad idea to mix business with pleasure and other
interests. All it would take was one guest to claim an unwanted advance and he
could lose guests… and the ranch he’d been working so hard to save.”
When the reader first meets Marshall, it is while he is conducting an
orchestra. Marshall seems confident and in his natural element, but it soon
becomes apparent that the confidence is a facade. The conductor position is
temporary though, and Marshall is looking for something permanent. His family
is pressuring him to come home and work in the family business, but Marshall’s
heart is with the music.
Marshall is stressed out and needs a break. He is in a slump and
emotionally drained. He needs a place to regroup and re-evaluate. Although
going to a working dude ranch is not something he would usually do, but it
seems like a way to get away from everything, including his family and the
aforementioned former boyfriend who did a number on Marshall’s psyche. And,
Indigo, the owner of the ranch, is definitely a beautiful sight to see.
“Indigo was a
fine-looking man, with short dark hair, sun-kissed skin, and dark eyes. Tall,
dark, and handsome was the old adage, and it described Indigo perfectly. So did
a butt that could crack walnuts, for that matter, but concentrating on that
would do Marshall no good. No, much better if he was careful and didn’t jump
into things.”
The chemistry between Marshall and Indigo is apparent from the beginning,
even though both men are skittish. Indigo is insecure, and Marshall’s
indecision seems to be deep rooted.
Neither man is looking for a long-term relationship, and both men have
other obligations that take presence over making their encounter more than a
short fling, which Marshall is very wary of beginning.
“He shouldn’t do
this. For so many reasons, he needed to turn and walk away. Doing anything with
anyone was not a good idea. He was only staying for a week, and he needed rest
and quiet. Messing around with the ranch owner was probably one of the worst
ideas he’d had in a long time, and when it came to men, Marshall knew he was
the king of bad ideas.”
Andrew
Grey is the king of romance. His detailed descriptions of the ranch and the
men’s game of cat and mouse are beautifully written. Grey has the ability to bring a reader
quickly into a story and this third installment in the Bull riders series is no
exception.
There are a few places in the story that leave the reader with questions,
but overall the plot is well developed.  The
subplots in the story help develop the characters’ personalities and help
explain some of their seemingly strange behaviors. A love story in the truest
sense of the term, A Courageous Ride
is an enchanting story.