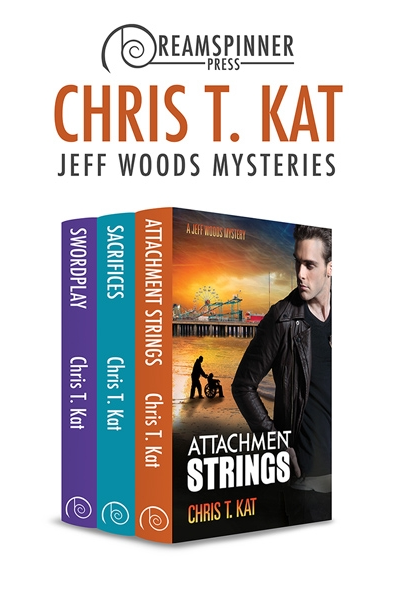 A Jeff Woods
Mystery
When he was
outed on the local news, Jeff Woods gave up his dream job as a detective to
become an on-air radio personality. The sacrifice was worth it to keep Alex and
Sean in his life, but Alex lost his job, too. Jeff can tell Alex worries he’s
pressuring Jeff too much, first with Sean and now the lack of money, but he has
no idea what that will lead Alex to do. Desperate times bring out the stupidity
in some people, and when Jeff discovers Alex is in over his head in a situation
he can’t handle, he needs all his self-control to stay calm. 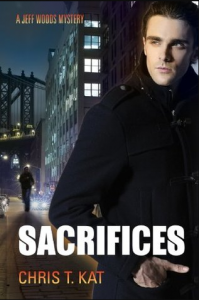 Life is not
easy with the Church of Virtue still spouting venom wherever they go,
homophobes at the police department, a gangster who wants Alex in the worst
possible way, and a bed that barely holds one grown man, much less two (and a
child), but Jeff is there to stay for good, and he’ll do what it takes to make
Alex believe him.

Review:
When readers first meet Detective Jeff
Woods in Attachment Strings, book one
of the Jeff Woods Mystery series, we are presented with a gritty and arrogant detective.
At the opening of that book, Woods and his partner, Detective Parker Trenkins are at a murder scene of a disabled
man. Trenkins is crude and abrasive. Woods is not much better. Although Woods seems annoyed with his partner’s lack
of tact for the dead man they are examining, it seems his concerns are more
about appearance than compassion. He reprimands Trenkins for not being
politically correct, but he does not seem offended by Trenkins’ prejudicial
slurs.
As Woods’ character becomes more developed, it is clear he is a bit of an
arrogant jerk. He is a closeted cop with a severe chip on his shoulder and a
serious prejudice against disabled people, who, as he admits, disgust him. His attitude
and life changes dramatically when he meets Alex Fisher, a hot, sexy, younger
man and his severely disabled younger brother Sean. Alex is the yin to Woods’
yang, and ultimately Jeff Woods is not the same man at the end of the book.
Sacrifices opens after Woods has left the police force. During
the break between books, Jeff and Alex have grown closer, and the reader sees
that Jeff has continued to evolve. The book opens with the two men exploring a monogamous,
committed, yet somewhat strained relationship. Jeff and Alex are both taking
care of Alex’s brother, Sean. Life is far from rosy.
“For
some people, I was a hero—for rescuing Sean and Alex, for having been a cop,
for being outed and standing by my man, or whatever other reason. For some
people, I was scum for exactly the same reasons. There’s just no pleasing
everyone. The members of the Church of Virtue definitely didn’t like me. They
didn’t like a lot of people, especially gays.”
Jeff is in love with Alex and will do what it takes to get his young
lover to relax and trust him. That is no easy task. To say Alex is skittish is
an understatement.  Jeff’s mantra regarding
his new family and love for Alex is presented on the first page of the novel:
“Mine
to protect. Mine to love.”
With Attachment Strings and Sacrifices, Chris T. Kat has written a
realistic love story between people who have had a difficult time fitting into
society and accepting love. Real life is messy and Kat explores this concept in
this series. Both Alex and Jeff are battling internal and external demons. In
between the love and tension, Kat throws in quite a bit of drama. She also
tackles homophobia and prejudice against the differently abled in a dramatic
way.
Sacrifices is written in first person point of view from Jeff’s
perspective. As a result of this, Alex’s thoughts and motivations are often
hidden from the reader. His actions and conversations with the other characters
are the readers only hint into what is going on within his insecure and
immature mind.
Both Jeff and Alex are dynamic characters who go through a lot of changes
throughout this book. While Jeff does a lot of changing in the first book, Alex
is forced to change more in this one.
Jeff’s evolution seems hard fought as does his trying to convince Alex it
is okay to depend on him. Jeff’s evolution in this series is dramatic and Kat
does a good job making those changes realistic. Although the drama in the book
is a bit over-the-top in some areas, it is compelling.
Alex is smart and insightful, but his innocence and insecurity heighten
the drama and conflict. In order to appreciate the reasons behind his personal
drama, one needs to have read the first book in the series. Alex has never been
in a romantic relationship, and as the sole care provider for Sean, Alex is
stretched like a rubber band emotionally and physically. He is fearful of
losing both Sean and Jeff. And his fear of losing Jeff causes Alex to make some
pretty bad and dangerous decisions.
“The
authorities hadn’t gotten involved, but the damn Church of Virtue had published
an article in our local gazette, accusing Alex of neglect and worse. I wanted
to throttle each and every member of this Church because they hurt the people I
loved. Alex had been devastated that day and ready to give up. He’d questioned
whether he was equipped to raise Sean, and nothing I’d said seemed to get
through.”
Sean is more fully developed in this book, and his love for Alex and Jeff
seems to be the cement for this developing trust in this relationship. Parker
Trenkins, Jeff’s former partner on the force, plays a more important role in
this book also. Parker’s relationship with David, although not fully developed,
is complex and leaves the reader curious for more information about them.
Kat has a talent for writing sparse prose and engaging dialogue. There is
a lot present between the lines of the story, especially when it comes to Alex.
The background of the characters is paramount for understanding their actions.
The dialogue and sex scenes are intimate and help the reader better understand
the characters’ motivations. The subplots in the story help develop the
characters’ personalities and help explain some of their seemingly erratic
behaviors. Drama with a side of romance makes Sacrifices an engaging story.
Reviewer Note: Thank you to Chris
T. Kat for providing an advanced review copy of this title in exchange
for my honest opinion.