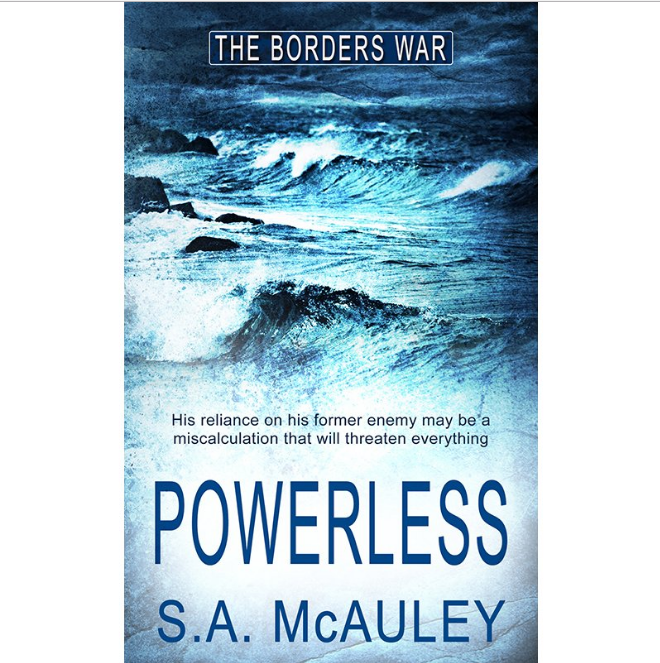 Title: Powerless (The Borders War #3)
Author: S.A. McAuley
Publisher: Totally Bound
Rating: 5/5 Smooches
The
Blurb:
He was built to be invincible.
Merq and Armise return to the States after
their mission to assassinate the remaining Committee members only to find the leadership
of the Revolution isn’t as stable as they had thought.
Outside forces come crashing down on a
Revolution stronghold, leaving two of their soldiers gravely wounded. Merq’s
history with his brothers in arms Simion and Neveed forces him into making
decisions that will impact his future with the Revolution. 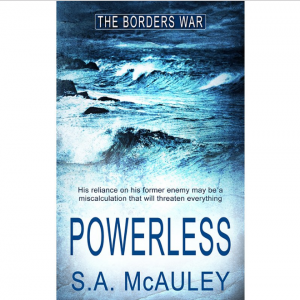 Merq has always identified as a soldier first.
Always known who deserved his loyalty and who didn’t. But with the uncertainty
surrounding the leadership of the Revolution, the mysterious disappearance of
the jacquerie and increased activity with the PsychHAgs, Merq knows there are
few people he can trust.
The only man Merq wants or needs at his side is
Armise Darcan. But his reliance on his former enemy may be a miscalculation
that will threaten everything Merq stands for.
This third book in the Border Wars
series is intriguing and intense. In Powerless,
S.A. McAuley has taken this series to a new and breathtaking level. In order to
really appreciate this book and the intricacy of the plot, the reader needs to
read this series in order: One Breath One
Bullet, Dominant Predator and Powerless.
It is difficult to review this book without
mentioning the rest of the series as each book builds on the previous one. The
intensity of the story, characters and angst has built to an incredible climax
in Powerless. While the first two
books are well written and intense, Powerless
presents a more concentrated sense of tension and purpose. This book brings
the reader inside the troubled mind of Merq Grayson as he battles his training
with his desire for free will.
Grayson’s mantra continues to permeate his
thoughts even when he doubts his sanity and actions:

“One breath.
Inhale.
Hesitation is my enemy.
Solitude my ally.
Death the only real victory.
Exhale.”
Grayson and Armise Darcan are not typical men
in any sense of the word. They were bred to be soldiers. Their genetics have
been modified. They have been trained to kill and follow orders. Their loyalty
is supposed to be to their leaders only. Independent thought and emotional
connections to others are not part of their makeup or training. Their backgrounds
are set in the first book as defined by the following descriptions:
“Merq Grayson has known only war. He is an orphan, a skilled
Peacemaker, soldier, and sniper. And it is his destiny to right the wrong
created by his grandfather six generations removed—the man who invented the
sonicbullet. Armise Darcan is his enemy. A sniper and Dark
Ops officer who fought for the People’s Republic of Singapore in the Borders
War, Armise may be the only person on the planet strong enough to keep Merq
from completing his mission.”
McAuley has done a wonderful job developing these characters
and having them evolve throughout the series. There are no two ways about it.
These men are intense, passionate and, at times, unbelievably frustrating. But
even when the reader is tempted to give up on one of the men, an expert plot
twist or implication thrown into the dialogue reels the reader back.
In this series, McAuley has created a complex,
multi-dimension world, where not everything is at it appears to be. The political
turmoil and violence are palpable as is the tension and magnetism of the
protagonists. The plot twists are surprising and sometimes extreme.
Grayson and Darcan are sublime protagonists. Their
relationship takes the reader through an emotional roller coaster in each of
the books. In biting prose and often uncomfortable dialogue, McAuley has
developed these two men who display characteristics of power, strength and
vulnerability. The emotional and physical connection between Grayson and Darcan
is electric.
“I looked to Armise, not even having to spend
one second searching his reaction to know the truth of everything between us. I
trusted Armise. Because he had earned that trust from me through words and
action. And while Neveed believed he could still manipulate me with this, I’d seen
through his bullshit so long ago that his taunts no longer help power over me.
Grayson believes he knows the truth, but as Darcan declares,
“In war, truth is the first casualty.” Grayson’s world is soon turned upside
down. Both Grayson and Darcan are tragic heroes in the sense that they both
possess a fatal flaw, or hamartia.
McAuley reveals Grayson’s flaw in this book. Darcan’s flaw is clear yet not
overtly stated.
“’I hurt Armise. I’ve never hurt as much as I
have in the last year and a half. I still hurt even with you standing right in
front of me, because I have no idea where we go from here. How do we forget all
of the awful shit we’ve said and done to each other? We’re bad people, Darcan,’
I snarled. We’ll always exist more in the darkness than the light. But if we’re
going to make it, we have to find some way not to be bad to each other.”
‘
Powerless grabs the reader and pulls that reader head
first into the vortex of McAuley’s fictional world. In this book, the reader
learns more about Grayson’s relationships with Neveed Niaz, the President and PsychHAg.
The added information helps the reader understand why Grayson is in so much
emotional turmoil throughout the book. Like the other two books in the series,
this book is filled with action, violence and, surprisingly, compassion.

McAuley is an
expert storyteller. Her prose is dynamic and realistic. This must-read book (and series) is passionate in
every sense of the word.