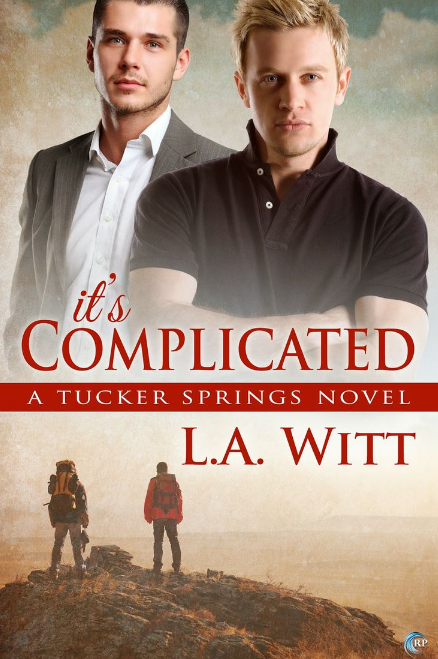 Title:
It’s
Complicated
Author:
L.A. Witt
Publisher:
Riptide Publishing
Rating:  4/5 Smooches
Blurb:
It’s
Complicated (Tucker Springs #7)
After their umpteenth
breakup, Brad Sweeney and Jeff Hayden are living apart and starting over from
scratch. The morning after a promising first date, they’re more optimistic than
ever that they can make it work this time . . . until Jeff’s ex-wife and
business partner calls to announce she’s pregnant with Jeff’s baby. Brad’s
already competing with a demanding business for Jeff’s time. Now there’s a baby
on the way, and worse, he’s afraid Jeff is still carrying a torch for the woman
who’s carrying his child.
Jeff is desperately
trying to keep his life together, but before he can even get his head around
the news that he’s going to be a father, his ex announces that she wants to
leave Tucker Springs. Now he either has to take over her role at the shop while
ferrying the baby back and forth from Denver, or move the business — and
himself — with her.
Brad and Jeff knew
reconciliation wouldn’t be easy, but they’re rapidly running out of room for
compromise. And sooner or later, something has to give.
Review:
L.A.
Witt has a knack for weaving a great plot and developing complex, realistic
characters, and she does not disappoint in the latest installment of the Tucker
Springs world, It’s Complicated. In
the case of Brad Sweeney and Jeff Hayden, the term “it’s complicated” is a mild
understatement. Every aspect of these men and their relationship is
complicated.  No matter how much love
they have for one another, life keeps getting in their way.
Wanting each
other had never been an issue. Sex was the one thing we’d gotten right from the
start, and it was the last thing we’d finally given up when things had really
soured. I’d promised myself when we started dating again that we’d take it
slow, get our feet back under us as a couple before we went back to bed
together, but damn it, that was easier said than done. Right now, I felt closer
to him than I had in months, and I couldn’t see tonight ending any other way
than getting as close as humanly possible.
Heart beating
faster by the second, I turned into the driveway. My hard-on hadn’t lasted the
entire drive, but it was sure as hell coming back now. I took my usual spot in
front of the garage, and Brad parked next to it in the place that had been his
before he’d moved out. Seeing his car in that space that had been empty for so
long was weirdly familiar and alien all at the same time, but that thought
vacated my brain when our eyes met over the roof of his car. If my cock hadn’t
already been fully hard by then, it would’ve been in very short order.
At the beginning of the book, Brad and Jeff
seem to be perfect for each other. The way they seem to want each other and
connect both emotionally and sexually is tangible. But under the haze of that
love and connection, there is a concrete layer of tension and frustration. The tension
between the two men is palpable.
Brad
is in love with Jeff, but he seems distrustful of the man. Although he seems to
understand that Jeff has other responsibilities, Brad’s frustrations stems from
the fact that he is not the number one priority in Jeff’s life. Jeff owns his
own business with his ex-wife, and that business seems to take a lot of his
time away from his relationship with Jeff.
Although
Jeff’s bisexuality did not seem to be an issue when the couple discusses the
issues that caused them to split up, Jeff’s ex-wife and business partner,
Christine, plays a very prominent role in the turmoil. Now that she is pregnant
with Jeff’s baby, Brad’s insecurities about the closeness of the two come
screaming to the forefront. That, and the fact, that Jeff obviously had
unprotected sex with his ex-wife after he and Brad were already in an
established relationship.
I stopped at a
coffee shop in the Light District. I wasn’t all that hungry, not with my
stomach doing all these somersaults, but caffeine sounded like a winner. As I
waited for my order, I sent Nathan a text. You busy?
It was ten
thirty on a Saturday morning. There was a good chance he and Ryan were still in
bed. Couldn’t blame them — if I had a smoking-hot guy like that in my bed, I wouldn’t
be up this side of noon either. Especially since a Saturday off was a rarity
for me. And yet, here I was, wide awake and grasping for coffee while my hot
guy went to see his ex-wife. About a baby. His baby. Their baby.
What the fuck?
Of
course, understandably so, Jeff is freaking out, too. He loves Brad. He does
not want to get back together with Christine. But, he does want to be a father.

This was utterly
insane. It had to be a prank. A joke. Something. A baby? Now? With my ex-wife?
Really? For fuck’s sake. Every time I thought I had a handle on things,
something else threw a monkey wrench into it. And the monkey wrenches seemed to
be getting bigger and bigger.
No. I wasn’t
going to freak out. Wiping my palms on my jeans, I took a few slow, deep
breaths. I could handle this. It was overwhelming, and it wasn’t exactly a
minor thing, but I would deal with it and not lose my mind in the process. I was
thirty-five years old, not some fucking teenager who’d knocked up his
girlfriend on prom night.
But how could I
not be panicked over this? My ex-wife and business partner was pregnant with my
baby. My boyfriend—ex-boyfriend?—and I were on ground that was way too fragile
for any kind of upheaval. Cursing under my breath, I thumped the wheel with my fist.
This was insane.
Neither
man seems mature enough to make their relationship work.
This
is not a typical man meets man romance. It also is not a typical romance
between two men in an established relationship. Witt has tackled a complex
topic, and the idea of happily ever after seems way out of reach for these two
men, yet, Witt drags in the reader who hoping for that HEA. It is Witt’s
writing style, prose and dialogue that catapult the reader into this story
hook, line and sinker.
Witt
does a wonderful job of showing how messy and complicated real-life can be,
even when two people seem to love each other and want things to work out. By
alternating point of views with each chapter, Witt is able to show the
perspective of each man as he struggles through trying to figure out what he
wants and whether or not the four of them (Christine, Brad, Jeff and the new
baby) can have a life together. The back-and-forth perspective is what makes
this story so engaging.
As
with other Witt books, the characters in this book have very real flaws, which
contribute to the elements of realism and perpetuate the angst. There is not a
lot of action in this book, but the plot, though simple in construct, is
intense. Witt does a great job pulling the reader into the emotional turmoil of
the characters and their lives, which seem to be spiraling out of control at
points in the story.
The
fictional town of Tucker Springs is located on
the western slope of Colorado, in between Grand Junction and Silverton. One of
the themes of Tucker Springs is that what you see is not what you get. The
collaborative world of Tucker Springs, with a population of approximately
75,000, has been created by L.A. Witt, Heidi Cullinan and Marie Sexton. The
books in this series can be read as standalone novels, but the characters do
interact from book to book.
Thank you to Net
Galley and Riptide Publishing for providing a review copy of this title in exchange
for my honest opinion.