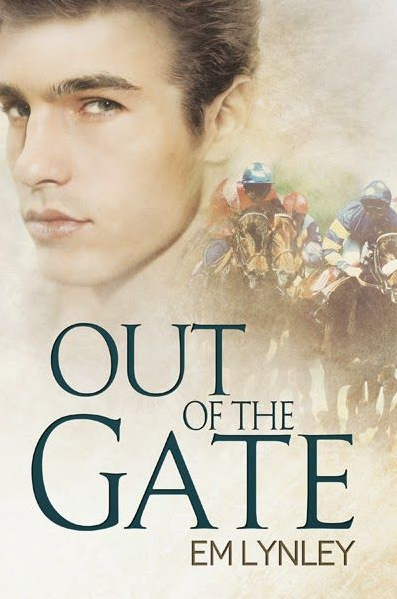 Title: Out
of the Gate
Author: EM Lynley
Publisher: Dreamspinner
Press
Rating: 4/5 Smooches
Blurb:
British
actor Wesley Tremayne thinks he’s close to hitting the big time—a film
career—with his role as a hunky explorer on a popular American TV show. Success
should be just around the corner, as long as he keeps his sexual orientation a
secret. Wes’s best friend and beard, Julia Compton, forms the other half of a
glamorous Hollywood couple that’s merely a
façade.
Evan
Taylor left his acting career behind five years ago without looking back. He’s
always been more comfortable around horses than people—especially Hollywood
types. His new life training racehorses is a dream come true, but increasing
financial problems and an abusive boyfriend have him doubting himself and his
choices.
Then
Wes and his friends buy a third-rate racehorse—partially for publicity—and send
him to Evan’s stable. Wes’s friendship with Evan soon develops into an
overpowering attraction he can’t act on. He’s never met a man like Evan, but if
there’s any chance for a future together, Wes must choose between a career he
loves and the man he adores.
Review:
Sir
Walter Scott wrote, “Oh what a tangled web we weave, when first we practice to
deceive!” That phrase seems an appropriate comment for the characters in EM
Lynley’s novel Out of the Gate. In
this novel, the characters intentionally and unintentionally practice
deception.
Lynley
has taken a relatively straightforward plot and melded it with interesting
characters and a few simple plot twists to keep readers engaged and wanting
more. Lynley does a great job of developing the characters through description
and dialogue, both internal and external.
Wesley,
Julia, Lance, Vanessa and Brent are actors on a hit television series. When
readers first meet them, the group is at a horse track. Brent, who is friends
with horse trainer Evan Taylor, is the only one familiar with horse racing. Despite
being novices, the group has fun betting on the horses and decides to purchase
a race horse.
Out
of the gate, these characters seem a bit superficial and spoiled. They seem to
like to have a good time, drink too much and attract attention. Upon first
glance, they are not very responsible. But there is something different about
Wes that makes him stand out from the group.
Wes
seems a bit more down to earth, and readers find out quickly that he is hiding
a secret. His romantic relationship with Julia is a carefully orchestrated
façade that they both entered into to help their careers. They are not just
putting on an act for the public, but also for their fellow actors. Although
both Wes and Julia appear to be carefree, happy and in like with each other,
appearances can be deceiving.
“Wes,
I think we really need to talk about this.”
“What’s
to talk about?”
“I
don’t want to keep doing this either.”
“Did
you meet someone?” He glanced over quickly and saw her shake her head.
“No.
But it’s making you miserable. Is it worth it?”
“Saul
thinks so.”
“You
really want to keep playing this game for the media and your manager? This kind
of deception only sets back wider acceptance of gay actors. No one’s lost their
roles over coming out lately. The homophobic actors are the ones losing out.
Remember Isaiah Washington? Where’s he now? Even Alec Baldwin lost a job for
his big, fat mouth.” 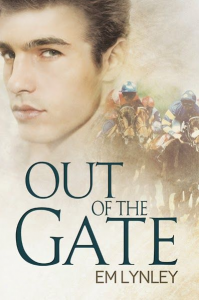 At the beginning of the novel, Julia
seems to support Wes, but she is just as concerned about her career as he is,
and at this point in time, their careers are intimately linked. Julia seems to
realize that Wes is unhappy before he does. That observation proves to be
ironic.
“Get your priorities straight, Wes. Focus on your career. You don’t getsecond chances around here. Take a few days off and the next hungry actor will crawl over your dead body to get a part you should have had.” She let out a little huff and stalked off in the direction of her bedroom.
Going along with the theme of
appearances being deceiving, the readers are introduced to horse trainer Evan
Taylor and his jet setting boyfriend Gary. Without giving away too much of the
plot, let’s just say, they have some serious problems. One issue that is
apparent from the beginning is that Gary seems to have no respect for Evan.
There is more to it than that though. Gary is abusive and a user who does not
seem to be concerned about Evan’s wellbeing. Gary’s betrayal is dramatic and
violent.
Evan
has had a very negative experience in Hollywood
and dislikes people associated with the industry. He reluctantly agrees to
train a horse that the group of actors buys together because he is having some
financial challenges, and Brent is his friend. Despite Evan‘s dislike of
Hollywood types, he is drawn to Wes.
Evan
quickly pressed the button to close the message, not trusting his eyes. He got
a pleasant flutter in his belly at the idea Wes wanted to come up on his own,
but it soon turned into a heavy stone. He only imagined there was more to Wes’s
request than there possibly could be.
Wes
would bring Julia, of course. Evan read the message again, expecting his
wishful thinking had read all the pronouns wrong the first time around. But at
second, third, and fourth reading, it still said “I” and “my.” All singular.
Evan’s
spirits lifted again.
He
spent a frustrating ten minutes reminding himself how bad an idea it would be
to let himself fall in love with a sexy actor—who had a girlfriend yet
continued to send Evan maddeningly mixed signals.
Wes
Tremayne embodied nearly everything Evan hated, feared, or avoided, yet Evan
couldn’t stay away from the guy.
Just how much worse could Evan’s life get now?
And,
Wes is drawn to Evan. Wes realizes he is in trouble the first time he talks to
Evan.
Wes
tuned out their chatter, smiling as he replayed that first encounter in his
mind. It had been only a few seconds, but it made quite an impression on Wes.
Evan Taylor was damn fine. Lively hazel eyes reminded him of vintage champagne,
and the straight nose, and strong, square jaw wouldn’t have been out of place
on Wes’s interpretation of a Greek god. He was several inches shorter than Wes,
who had a thing for tall men. But with a face like that, well, he could make an
exception.
In
fact he already had. This was the good-looking trainer he’d been ogling through
binoculars the previous week and occasionally daydreaming about.
But
only in his wildest fantasies, because Evan already had a boyfriend, though
anyone who wouldn’t turn around when he shouted didn’t deserve him. Wes thought
the dark-haired guy leaving as they arrived had glanced at the porch as if he
hoped Evan wouldn’t come out. What was going on there?
It is not just Evan that Wes is
attracted to; he also likes the peace and quiet of the farm, and the way the
horses are being cared for.  Wes loves
acting, but he misses the stage and he doesn’t like having to hide who he is.
He
hopped in the shower and dressed in black jeans, with an Armani shirt and
jacket, and put a little gel in his hair to keep it from frizzing in the
California heat. It beat the typical British chill, but he’d never quite got
used to it almost year round. He went to the underground garage beneath his
building and slid into the smooth leather of the Porsche Boxster. It was the
first car he’d ever owned—he’d never needed one in London or New York—and he
hadn’t got used to either the left-hand drive, or the LA traffic yet. It was
luxurious enough to match his star image, but not so expensive he’d feel
embarrassed driving around in it.
God,
how he hated all the identities he felt expected to wear, even when he wasn’t
in front of a camera. He was seriously considering chucking it all in and going
back to the stage. Maybe television just wasn’t right for him, and if that was
the only way to get into films, then he could just tick that one off the list
too.
He
thought about Evan Taylor, and his exodus from Hollywood began to make more
sense.
Lynley does a great job developing
this story and characters.  Aside from
Wes and Evan though, the rest of the characters are not very developed or likeable.
It is interesting how Lynley uses the superficiality of the other characters to
enhance the personalities of Wes and Evan. Of course, that aspect does make the
reader more engaged in wanting the two men to find peace of mind together,
especially when readers find out what is behind Evan’s behaviors. Overall this
was a well written and engaging story.