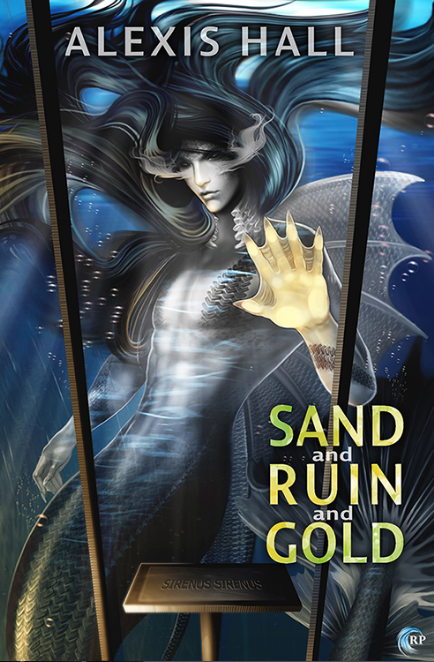 Hello, and
welcome to my fourth ever blog tour (I really do have to stop counting),
celebrating Riptide Publishing’s release of Sand
and Ruin and Gold. Yay!  Thank you so
much to Smoocher’s Voice for hosting me, and for sending me such a thoughtful
interview. And, to you, dear reader, for stopping by. If you’d like to come
with me and keep me company on my virtual wanderings, you can find a full
listing of when and where I am here on Riptide’s tour page.
For the rest of
the blog tour, I’m trying something a bit different. Since Sand and Ruin and Gold is a short story, and I tend to feel that
explaining short stories takes the fun out of them, instead I’m posting, well,
a completely different story. It’s set in the same world so I guess you could
call it a kind of spiritual sibling. If you like it, you’ll probably like Ruin. If you don’t … then … um … you
probably won’t. Sorry. You can find full details of where to chase that down on
the RP tour page which, once again, is here, or you can swing by my blog where I’ll be attempting to keep track
of everything.

Oh, and there’s
a giveaway. Nothing very dramatic I’m afraid, as I don’t have any mermaids in
my possession right now, but if you want to enter the Rafflecopter below, I’d
be delighted to offer a book from my backlist, in either hard or soft copy. 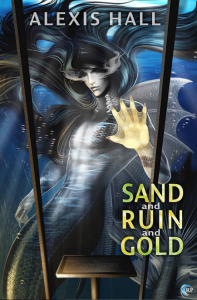 Jodi:          Which of your books was the most challenging write?
Alexis:       The thing I’ve found
about writing is that, unsurprisingly, you get better at it if you do more of
it. And so it becomes easier to do the things you need to do in order to make a
book work. Anything, really, from knowing where to put the feels to where to the
put commas.
This probably sound as bit melodramatic
but I kind of had to break myself in order to put the emotional payoff into the
final scene of GLITTERLAND. When it
first came out, I talked about this a lot, but that very last scene – where Ash
tries to win Darian back – took a lot of editing and, through several drafts, I
couldn’t actually work out how to give it what it needed (which was,
essentially, Ash having an emotional breakthrough). Then, at about two in the
morning, I sort of realised that I needed
to have an emotional breakthrough. I couldn’t make my character cry, and be
vulnerable and sincere, because those things scare the fuck out of me.
So.
Yeah. Challenging.
Jodi:          Which of your books
was the most fun to write?
Alexis:       I have fun writing all
my books. This is basically my hobby, and I wouldn’t do it if I didn’t enjoy
it. I think I have more fun objectively with the genre stuff, because I get to
romp around and write about airships and vampires, whereas with the contemps I
have to have emotions and things.
Jodi:          For you, what is for you the perfect book hero?
Alexis:       I really don’t know how to answer this.  I kind of feel that a hero can only work in
the context of the story he appears in, so – to an extent – I don’t think
describing a hero in a vacuum is something I can do. I would say that I have a
strong attraction to non-traditional portrayals of masculinity, and I like to
read about heroes in whom I can recognise at least some part of myself.
Jodi:          Is there a message in your novel that you want readers to grasp?
Alexis:       Um, not so much, especially not in RUIN, which is a very
deliberately opaque text. A friend of mine went to a showing of The Nine Lives
of Thomas Katz, after which there was a short Q&A with the director. One of
the questions that was asked was “what is the message you’re trying to get across
with this film” to which the director replied “if I wanted to give people a
message, I’d write it on pieces of paper, and stand on a street corner handing
them out.” That’s kind of a really harsh thing to say to someone who’s trying
to engage legitimately with you work, but – delivery aside – I do sort of feel
that if there is any message in my work that could be better communicated by
expressing it directly, I’d be better off expressing it directly. I hope
readers will find something of value in what I write, but it seems borderline
hubristic to call that message. Ultimately we take away from texts what we find
in them.
Jodi:          How much of the book and characters is realistic?
Alexis:       Well, the silly answer is that “it’s kind of a cyberpunk
fairytale about a merman and a genetically engineered marine park trainer so …
not very.”
The sensible answer is that I feel the story is very much written in a
fairytale mode and that, therefore, realism is not really a goal here. It’s
told in very broad strokes, and the characters are very archetypal so while I
hope it has a resonance, I don’t think it has the level of detail and sense of
actuality that’s I would feel was a prerequisite for realism.
Jodi:          What is your next project?
Alexis:       I have a queer steampunk called PROSPERITY, which is coming out at the end of October, followed by
an anthology of stories set in that universe coming in January. Then I’ve got a
run of contemps.

About AJH
Alexis Hall was born in the early 1980s and still thinks the
twenty-first century is the future. To this day, he feels cheated that he lived
through a fin de siècle but inexplicably failed to drink a single glass of
absinthe, dance with a single courtesan, or stay in a single garret. He can
neither cook nor sing, but he can handle a seventeenth century smallsword,
punts from the proper end, and knows how to hotwire a car. He lives in
southeast England, with no cats and no children, and fully intends to keep it
that way.
About Sand and
Ruin and Gold
Once upon a time . . . that’s how the old stories always begin.
Once upon a time there was a king of a fallen kingdom. He was
just and he was beloved. Or so the numbers said. One day, he gathered together
the greatest, wisest minds in all the land—not sorcerers, but scientists—and he
bade them fashion him a son. A prince. A perfect prince to embody his father’s
legacy.
The scientists each brought the prince a gift:
beauty, strength, ambition, intellect, pride. But they must have
forgotten something because when he saw
the mermaids dance at the Cirque de la Mer, he ran away to join them.
For a year, he trained them, performed with them,
thought he was happy. For a year he thought he was free. But then Nerites came:
A merman who refused to be tamed. A captive from another kingdom. A beast in a
glass cage.
The old stories always end with happy ever after. But this isn’t
one of the old stories. This is a story of princes and monsters.