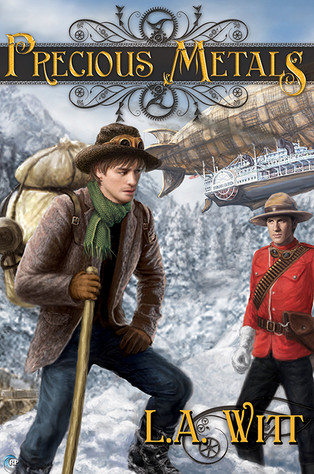 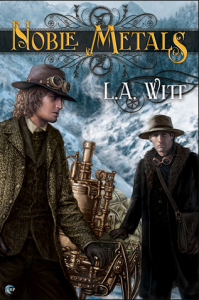 L.A.: I knew a fair amount about the Klondike Gold
Rush already, but had to brush up (it had been a while!), and also just do some
general research about details like clothing, food, etc. And of course, for
both books, I had to research transportation and mining—mostly so that I could
change them via steampunk.
Jodi: Why did you
choose to focus the action of the story on the Klondike Gold Rush?
L.A.: I’ve always wanted to write something in
the Klondike Gold Rush, and when the idea of winter-themed steampunk came up,
it fit perfectly.
Jodi: It is interesting that Paul and Joseph
know they are attracted to men, but they also know they should not talk about.
Joseph even mentions that he took this adventure before he decided to get
married. Did you do research regarding homosexuality during this time period?
Is there a lot of research available on this subject?
L.A.: There isn’t a whole lot available
regarding homosexuality in that time/place, but I found whatever I could. The
consensus was that homosexuality existed (obviously), but wasn’t widely
accepted. Particularly in communities where it wasn’t accepted, I don’t imagine
it would take much for a young man to figure out that looking at other young
men was a bad idea.
Jodi: Constable Paul Benson is an intriguing
character. He flees his home to avoid a scandal, and although he seems to keep
his sexuality quiet, the men he works with seem to know the truth. How do they
know?
L.A.: I think when you work in close quarters
with people, you tend to figure it out. I know a lot of guys in the military
who haven’t been open about their sexuality, but the others catch on when a man
doesn’t notice women, etc. So in Paul’s case, I think that to varying degrees,
the other guys know there’s something different about him, but don’t all
necessarily know he’s gay. Some have
certainly figured it out, though, or at least strongly suspect.
Jodi: Joseph is a very passionate and determined
young man. Tell us a little about his character and motivation to keep going on
his journey.
L.A.: Joseph is kind of your typical wild-eyed
kid who wants to see and do everything, gets bored easily, and thinks danger is
a small price to pay for adventure. But he’s also very devoted to his family,
and he’ll gladly put himself into real danger for the sake of one of his
brothers. When he goes to the Klondike, he’s mostly in search of adventure, and
to see if the machine they’ve built will really work and dig up the gold more
efficiently. His second journey to the Klondike, though, is solely to save his younger
brother. By that point, he’s realized that adventure is not worth it — particularly
after losing his eldest brother — but he refuses to give up until he’s saved
his brother or he’s dead himself.
Jodi: Although Paul and Joseph are only together
a short period of time, they both risk their lives for each other. Is it the
harsh conditions that accelerate their emotional bond or simply finding someone
who accepts them for who they are?
L.A.: I think it’s a little of both. When you’re
in a those harsh conditions with someone, and you’re relying on them and nobody
else in a situation where either of you could be dead without warning, it does
create a bond fairly quickly. I’ve met people who’ve fallen in love on the
battlefield, and it’s the same thing. There’s a good chance one or both of you
is going to die, so when you form a connection with someone, there’s a sense of
urgency that isn’t there under normal circumstances, and emotions do crazy
things. Plus when you’re relying on that person to keep you alive, it creates a
bond of sorts. Throw in the sexual attraction and the realization that this
person is okay with who you really are (when most people are not), and you’ve
got a recipe for people falling very fast, very hard.
Jodi: Although this is the second book in the
metals universe, the book can be read as a standalone. As an author, do you
prefer that people read your books in order, or does it not make a difference?
L.A.: It doesn’t make a difference. They’re
meant to be completely separate stories, just set in the same world. If it’s an
actual series, like the Tooth & Claw trilogy
or the Cover
Me trilogy,
then you’d definitely want to read them in order. But books like this where
they’re just in the same world, it really doesn’t matter.
Jodi: Is the difference in generations the
reason the two men view being openly gay differently?
L.A.: Difference in generations, different
regional upbringing, different personality types… I think there’s a number of
reasons why the boys feel differently about it. Plus in Joseph’s case, he’s
confident that his family will be happy he’s alive at all, especially after
losing their eldest son, so they won’t split hairs over who he’s sleeping with.

Jodi: What is the most challenging aspect of writing
a historical novel?
L.A.: Getting the facts straight. I second guess
myself at every turn, particularly since there are so many little details that
seem trivial, but can pull someone right out of a story. Would someone in this
era/setting have lace-up boots or pull-on? What would his gloves be made out
of? Things like that.
Jodi: Was it a
challenge to intermingle the violence and romance in this book?
L.A.: I’m sure this makes me a terrible person,
but…no. LOL. I’ve been putting those two together for quite some time—A Chip In His Shoulder,
The Left Hand of Calvus,
etc. And of course, when I join forces with Aleksandr Voinov, stuff like Hostile Ground
and Unhinge the Universe.
I guess it’s just fun to make people fall in love in the middle of chaos.
Jodi: What inspired
you to make Joseph a differently abled character?
L.A.: Getting from Seattle to the Klondike is a
grueling, hellish journey to begin with. I wanted to make it extra difficult
for Joseph, in part because I like making my characters work for everything,
and in part because I think it really underscores what kind of person Joseph
is. He’s not going to let anything—weather, terrain, an artificial leg,
bandits, lack of provisions—keep him from having an adventure, and he’s damn
sure not going to let them keep him from saving his brother.
Precious Metals
For Constable Paul Benson of the North-West Mounted
Police, monotony is a blessing. As a provision inspector below the Chilkoot
Pass during the Klondike Gold Rush, he’s seen miserable conditions and gold
fever turn civilized prospectors into madmen.
Joseph Starling is on his way to the Klondike to find
the men who savagely beat him, murdered his eldest brother, and stole their
mining machine. They’ll kill his youngest brother if Joseph doesn’t operate the
machine for them—it won’t work without him. With time running out, Joseph must
purchase an expensive ticket aboard a crash-prone airship. But the station is
miles away through dangerous terrain.
Under orders, Paul grudgingly escorts Joseph, but
quickly finds himself intrigued by the young man. As they make their way toward
Juneau, it’s not just the need for warmth that drives them closer together. But
neither man can draw an easy breath until they make it to the gold fields . . .
and there’s no guarantee that Joseph’s brother will still be alive when they do.