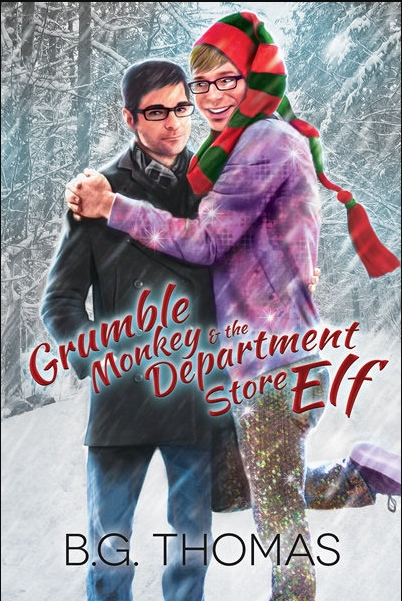 Title:  Grumble Monkey and the Department Store Elf
(Audio)
Author:  B.g. Thomas
Narrator:  Donald Tursman
Publisher:  Dreamspinner
Press LLC
Rating: 5/5
Smooches
Blurb:
Kit Jefferies, a part-time department store Christmas elf, is an artist
who loves life and his family. Unfortunately, his car dies at a rest stop in
the middle of nowhere as he is heading home for Christmas. Enter Nick St.
George. Nick is a very unhappy man – he’s achieved his professional goals only
to find the rest of his life bleak and empty. Deciding there was only one way
to make everything right, he is on his way to San Francisco on a dark mission,
and even the horrible sleet storm that blocked his path won’t deter him. That’s
when he found Kit. At first, Nick is pretty sure rescuing Kit was a big
mistake. Kit’s personality is just too, well, effervescent. But as the miles go
by, Kit begins to bring light to his dark heart. It might even be bright enough
to illuminate a Christmas miracle.
A story from the Dreamspinner Press 2013 Advent Calendar package
“Heartwarming”.
Review:
This is the first
time I’ve heard Donald Tursman narrate a book. His deep rich voice makes for
easy listening. I would definitely listen to him again. 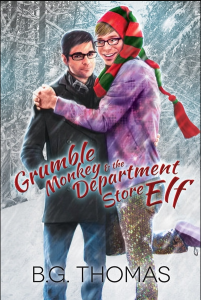 Nick is a lost man
who thinks he’s done with life or life is done with him. Even though he’s
become a very successful man after his parents severed all ties with him just
because he was who is was, gay, Nick feels there is nothing left. He feels
empty. Going to San Francisco was going to fix all of the emptiness he felt.
That is until he rescued Kit, disguised as one of Santa’s elves.
Things don’t get off
to a great start when Nick offers to take Kit home to his family. Kit irritates
Nick to no end. They’re just too opposite, nothing alike but sometimes that’s a
good thing. Nick is uptight and swears a lot, Kit is laid back and doesn’t like
to swear and he sees the good in everything.
By the end of the
journey Kit has changed Nick’s idea of life.
This was a really
cute holiday read and you will recognize the next door neighbors that are
mentioned if you’ve read any other of the books B.g. Thomas has written. I love
how he crosses over characters. This was rather enjoyable, a great listen for
when you’re in your car while doing your Christmas shopping or just riding
around looking at Christmas lights.